In two of our previous blog posts we discussed the role the Crossley family played in the Charity’s history, chiefly the involvement of Sir William John Crossley 1st Bt. and his son, Brian Crossley. The motor engineering entrepreneur Sir William Crossley held the position of Trustee and later Chairman of the Manchester Refuges Committee. Brian, alongside a number of other philanthropic Crossley relatives, including his brother Eric, was also one of the Refuge’s Committee members. Sadly, Brian’s years were cut short in the Second Battle of Artois in 1915.

Upon Sir William’s death in 1911, another of his sons, Kenneth (1877-1957), assumed his Baronetcy and hereditary knighthood. Sir Kenneth Irwin Crossley 2nd Bt. was the Chairman of Crossley Brothers and Crossley Motors Ltd; with his inheritance he took on his father’s role as Property Trustee of the Manchester Refuges as Sir William had previously assisted in the purchase of the Rosen Hallas ‘Training Home for Girls’ on Bury Old Road, Cheetham Hill.

Sir Kenneth, like his father, was involved in many charitable causes including chairing the Crossley Sanatorium located in Frodsham (which was opened by Sir William and formed part of the Manchester Hospital for Consumption and Diseases of the Throat and Chest). His role in the Manchester Refuges was a silent yet important one as the annual reports suggest. The Refuges profited from the success of Kenneth’s work at Crossley Brothers Limited with the cumulative preference shares providing the Refuges with around £1440. This is the equivalent to over £59,000 in 1920. Interestingly, the Together Trust's very own Bridge College resides close to the Crossley Bros. Ltd. Gas Engine Works which as situated on Pottery Lane, Openshaw.

Sir Kenneth regularly made personal donations of £10 to the Refuges, the equivalent of £410 per annum. Perhaps the most heavily involved of the Crossleys was, however, Lady Mabel (Sir Kenneth’s mother). As Vice-President of the Refuges Lady Mabel also made exceptionally generous donations of £100 annually (the equivalent of nearly £3000 in 1920). The benevolence of the Crossley family provided some of the most deprived young people of Manchester and Salford with a safe environment in which to live and train for their futures. The Crossley legacy was immortalised by the Manchester Refuges in 1923 with the naming of the Crossley Home for boys on the Cheadle Site, and the laying of a foundation stone by Lady Mabel Crossley on 7 September 1923.


Sir Kenneth made a success of the motor company he had inherited with a large contract of work producing engines for military aircrafts and vehicles during the First World War until 1938, sometime after which the company was sold. In 1919 he purchased Combermere Abbey in Nantwich where he later retired. The former Cistercian monastery underwent numerous architectural and functional changes throughout the centuries, but it still stands today, resplendent, and testament to the Crossley enterprise and the painstaking restoration undertaken by Sir Kenneth Crossley’s great-granddaughter. More can be read about Combermere and its history on their website here.
Brian Crossley Combermere Abbey Crossley Motors Lady Mabel Crossley Rosen Hallas Sir Kenneth Crossley Trustees William Crossley

On sale:
The Ever Open Door - 150 Years of the Together Trust 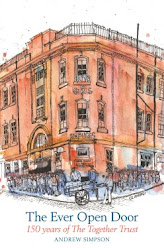